The VMI Keydets are in their first year of varsity water polo and in their first ever game they defeated Salem International 22-6. VMI was supposed to star their inaugural season Feb. 11 to open their season, but there were not enough players for Salem International so the game was deemed a scrimmage. The results were not published but from Tuesday nights score safe to say that VMI won that scrimmage.

In the actual first game for VMI they easily took care of business against Salem International. The first-ever goal in VMI's program belonged to freshman and team captain Molly Andoe who scored 23 seconds into the game, and Chelsea Nugent put VMI up 2-0 less than 30 seconds later. Salem was able to come back and score a quick goal to make it 2-1, but VMI then went on to score five unanswered goals to pull away.

Nugent led all scorers with seven goals, Andoe had six goals in the win and Mackenzie Perkins had four goals on the evening; overall eight players scored at least one goal.

"We talked yesterday and this win has been a long time coming," said VMI head coach Anna Phelps. "I was hired two years ago to put this program together and we've been waiting for this day. It was awesome and felt great."

Beating Salem is a good start, but just for some perspective Salem is a brand new varsity program as well. They did have a program in the past but it has been inactive for the past eight years, and 2012 is their first season back in the varsity ranks.

Visual evidence of the home win for VMI: 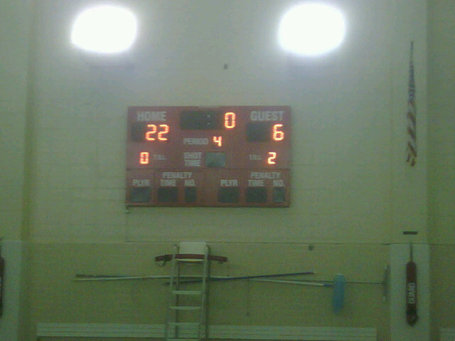