The 2012 Olympic Qualifying tournament is taking place in Edmonton, Alberta running from April 1 - April 8 on the men's side. This tournament is significant since it is the last chance for teams to earn a bid to the 2012 Olympic Games. Normally it is the three teams with the best finish who have not qualified for the Olympics will earn a bid to London, but due to who has already qualified there will be four spots on the line this week.

Here are the groups:

Germany and Montenegro both played in the Four Nation's tournament this past week and Germany lost 12-10 to the United State and 9-5 to Italy. While Montenegro tie the United States team 8-8 and lost 16-13 to Italy. The play was not great since the these teams arrived to California on little rest and play was sloppy.

My prediction of the four teams that will make the London Games (in no order) are Germany, Spain, Montenegro and host Canada. If Canada does make it in the top four they will qualify for the first time in 22 years and the only reason they made it was that the Olympics were in Montreal. The Canada team is very young so they are a wild card team in this tournament, but being in their home country will help.

Here is the schedule: 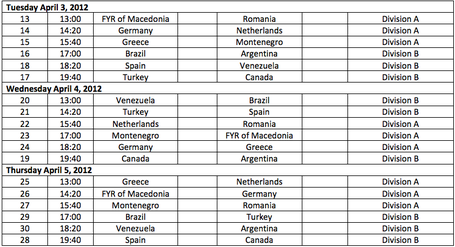