In a hard fought game it was Croatia who was able to upend the United States 11-10 and advance to the championship game of the 2012 FINA World League.

In the first period the United States got on the board first by scoring a pair of power play goals to lead 2-0. The second goal was a quick strike as the ejection came on a drive away from the ball and after a quick pass it was a one on none against the goalie and the ball was slammed home.

Croatia countered on their next possession but not before Team USA killed a penalty when Merrill Moses made a save. However, the ball was recovered by Croatia and then after some solid passing the ball was sent into the two-meter area and a penalty shot was awarded and made to make it a 2-1 game.

Here is a screen grab as he released the ball, not sure how it got past the goalie, but it did. 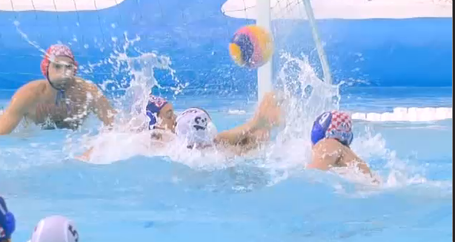 Croatia would go onto score on their next two possessions to tie the game on a pair of power plays chances, and the second goal came in a transition kick out where Croatia lined up quickly and Maro Jokovic was able to sneak one past Moses to tie the game at three.

Jeff Powers answered on the following possession from about seven meters out and the goalie was locked on Powers, but he was able to bar down the shot to put the United States back on top 4-3 to end the quarter.

The second quarter started out like the first when Jesse Smith scored on a nice pass and catch to put the United States up 5-3, but in a trend that has been happening all day as Croatia scored a goal on an amazing outside shot by Miho Boskovic.

Croatia scored again to tie the game for the first time on an outside shot which was actually tipped by a United States defender and changed the trajectory of the shot which was enough to get past Moses.

The first lead of the game came for Croatia came on a counter attack play with a cross pool pass to Petar Muslim who was driving to the goal and wide open. Muslim was able to catch the ball and quickly get it past Moses who had no chance to make the lateral move to block the shot.

The United States responded to tie the game at six on a power play goal by Layne Beaubien. Beaubien received a cross pass and moved closer to the goal, pump faking and then scored on a cross cage shot.

Team USA went back up by one goal as Timothy Hutten scored when he slipped back to about four meters from playing the post position and score on a point blank range. The penalty leading up to the goal was fairly questionable as the ejection came from the perimeter and the official indicated that the Croatian player grabbed the United States player by the head during a foul. However, from the video it was not clear and looked like an ordinary foul.

In the second half the defenses stepped up and limited the scoring throughout the third and fourth quarters.

Jokovic scored the first goal for Croatia in the second half after they were awarded with a penalty shot, and that goal tied the game at seven. The United States responded to go back up 8-7 after a failed possession by Croatia. On the possession leading up to the go-ahead goal by the United States.

For some reason after a bad pass by the Croatian team they retrieved the pass but instead of just tossing the ball away as the shot clock was winding down, a poor shot was attempted which allowed the United States to counter with a man advantage.

The United States scored on another outside shot, and this time it was Adam Wright who scored and put Team USA back up on top with an 8-7 lead. Once again Croatia found the back of the net on a power play goal to tie the game. The goal by Jokovic was his third of the game. The passing on the Croatian power play was not spectacular but they never let the ball hit the water while passing the ball around before the score.

The United States had a chance to go up 9-8, but they blew a power play chance with a terrible pass that was easily picked off by Croatia. Luckily that following Croatian possession did not lead to a goal.

After three quarters the game was tied at eight goals apiece.

Croatia took back the lead as Sandro Sukno scored on yet another power play chance for Croatia. At first it looked like Sukno would just slam the ball home as Moses was not in position to make the save after the cross pass, but Sukno would pump fake a few times and then score the goal.

Team USA responded with their own solid power play chance when Powers scored his second goal of the day on a skip shot from the outside, and the game once again was tied now at 9-9.

Sukno put Croatia back up on top 10-9 after converting on a Croatia's second penalty shot of the day. Then after a failed United States possession, Sukno got some help as he scored his third goal of the game. The outside shot was a skip shot that was not all that great, but the ball was deflected by both Moses and a United States defender to slip into the goal. That latest goal put Croatia up for good at 11-9.

The United States had a good chance to get within one goal. They had good movement on offense and had a player open and driving to the goal but the pass was off the mark and picked off with just over two minutes left in the game.

The final few possession for the United States were not going their way. They were turning the ball over and not getting the ball inside to draw ejections has they had the prior 30 minutes of the game.

The Untied States did make it 11-10 when they scored a goal on another outside shot with under a minute left. Apparently the FINA TV feed fell off after that so I do not know if the United States even had a shot to tie the game with about 50 seconds left in the game.

Well, the end result was 11-10, and now the United States takes on Italy on Sunday for the third place game.

One key player that was quiet was Tony Azevedo who had his second straight game without a goal as Croatia did a good job of holding the super star in check. Which also is not a shock since the Croatian national team coach is Ratko Rudic who was the United States from 2000-04, and knows that the key to the United States is Azevedo. Well, even with Azevedo being held without a goal the United States still was very much in this game and had chances to win.

The power play offense for the United States improved as they were nearly perfect from their chances, but their defense allowed Croatia to rack up multiple goals -- included two penalty shots -- on power play chances.

The United States only need a few things to go different if they were going to win. First off, there were two goals that were deflected before they reached Moses in the goal, and had those deflections not have happened then there would be a good chance that Moses would have stopped the shots. Particularly the 11th goal by Croatia which was a poor skip shot in front of the cage.

The United States also needs to wok on their counter defense, they were beat a handful of times and were called for ejections after a turnover which were costly. There was also a few miscues on their power play chances with some bad passes that were picked off.

Overall this was a good performance by the United States, but they still have a few areas where they need to improve upon on for the Olympics which are a five weeks away.

FINA TV has the game archived to be watch at any time on their website.