The United States were looking solid in these Olympics, but then they lost 11-6 to both Serbia and Croatia. At first it looked as if Team USA would be second in their group, but after that second loss they are fourth in their group play. Now, their quarterfinal match is against Croatia who has been the most dominant team at the Olympics with a plus-21 goal differential.

Heading into the London Olympics it was a given that six or seven teams could medal, and it still looks that way as any of these teams left can still medal sans Australia. However, the Team USA draw makes this exceptionally more difficult by going up against Croatia.

Croatia has been on a roll lately as they won the 2012 FINA World League over Spain, third in 2011 and in 2010 did not medal by finishing fourth place.

Team captain Tony Azevedo has felt the team slip away going back to their win over Romania:

"We started playing lackadaisical against Romania and Great Britain and we haven't recovered," he said. "We know that the next game is the one that matters. We've known that from the start."

It could have just been the team being over confident to explain not necessarily the loses, but not even being all that competitive. However, there is a positive in playing Croatia because back in early July Team USA did defeat them 9-5 back on July 9. This was in California and being a tune up game prior to the Olympics so one can not take too much stock, but it still has to be used as motivation for Team USA if they are to pull off the upset.

Here is the bracket: 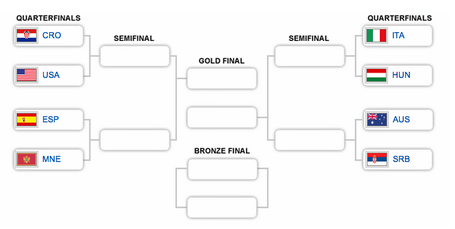 Here is the quarterfinal schedule that begins on Wednesday:

Of course all of these games are streamed online, assuming it works well.