Day 2 of the NorCal tournament gets underway at 8 a.m. PT, and so far all of the higher ranked teams have advanced which means the semifinals feature the top ranked USC Trojans will be taking on the No. 4 Stanford Cardinal. On the other side of the bracket it is No. 2 UCLA Bruins going up against No. 3 California Golden Bears.

Those top four seeds were not challenged in their first game on Saturday, but their other games were closer. The closest one of the top four seeds came to losing was when Stanford squeak past No. 5 UC Santa Barbara Gauchos 8-7.

Another close upset came in the losers bracket when No. 16 Air Force Falcons went to sudden death overtime against No. 11 UC San Diego, but ultimately fell 8-7.

Check back to our site here as we update results as the come in.

Below is the schedule (all times pacific) 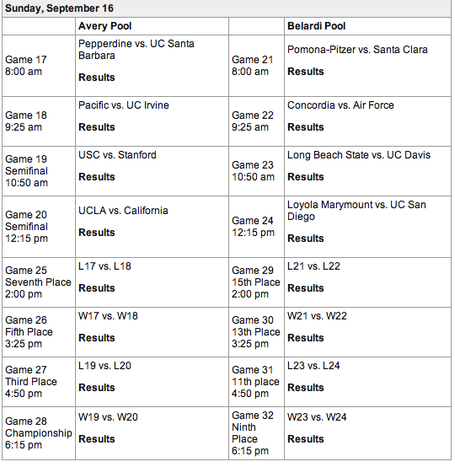