The Best of Utah, Illinois On Display at UCLA vs. UCSB Saturday

Share All sharing options for: The Best of Utah, Illinois On Display at UCLA vs. UCSB Saturday 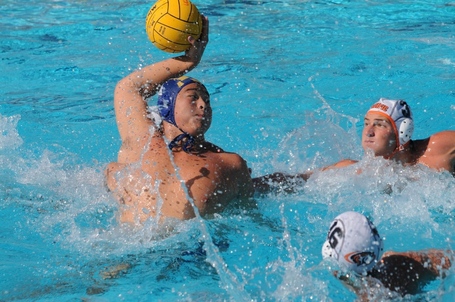 The surprising Gauchos of UC Santa Barbara and UCLA Bruins have swapped the second and third spots in the October 17 Collegiate Water Polo Association men’s water polo ranking. The Bruins will put their recent promotion at risk when they visit Isla Vista on Saturday for an important MPSF contest.

Both squads have excelled this season, each with a uniquely talented American player raised and trained in the sport outside of California: Utah’s Teddy Zhang for the Gauchos, and UCLA star Chris Wendt from Illinois.

Key players on the best Division I men’s water polo teams typically come from places like Newport Beach or Lafayette, California. They join powerhouse clubs at the age of 10 and have parents who excelled at football or swimming in their own collegiate careers. Less often one finds elite players like Zhang whose parents were farmers in China and took the family to Utah when given the chance to study at university.

A center-forward with 17 goals and stellar .739 shooting percentage for the Gauchos this season, Teddy Zhang can reasonably make the claim of being Utah’s finest ever water polo product.

"Yeah, there was Adam Huff who played at UOP," he recalls when asked about the best players from Utah. "But he stopped playing when he went away on his [LDS] mission."

Huff’s accomplishments aside, Zhang’s performance has made any comparison to the former Kearns High School star moot. More important than his raw statistics were Zhang’s three key goals in Santa Barbara’s historic defeat of Stanford on September 29. He also scored twice against the Cardinal at their home pool in a dramatic one-goal loss at the NorCal tournament, a match that raised the Gauchos’ profile to many fans, and then tallied another score in the team’s upset of UCLA in the SoCal Tournament on September 30. That victory propelled the Gauchos to its highest ranking (second) in over 30 years, a position it lost only this week.

Impressive stuff from the Salt Lake City native, especially for someone not even recruited out of high school.

Success in Utah aside, prospects for being recruited to a top-10 collegiate squad were dim. His Senior year Zhang took the advice and apartment space of a friend in Los Angeles and signed up for a summer with Foothill Water Polo Club under Pomona-Pitzer head coach Alex Rodriguez. With that his collegiate prospects and understanding of the game improved.

In Utah "...there’s no team defense really. There are usually one or two dominant players," and defenses are dedicated to stopping them one-on-one. And with only 20 high school programs overall the players get to know each other well.

"In California the game is much faster, more team oriented and role-based. And the hole set techniques [Coach Alex] taught me were cool too."

Zhang impressed Rodriguez enough to prompt a call to Wolf Wigo's former assistant Tim Settem. The Gauchos invited Zhang to try out and, one injury-hampered season aside, he has produced for the squad ever since.

He stood out to USA Jr. National team standout Chris Wendt too.

"Yeah, I remember [Zhang] from the Midwest zone team. He was good," Wendt said, indicating a connection with the non-West Coast talent. He agreed with Zhang about water polo in the Golden State.

"The game is different in Illinois; there are always a few great players on a team. California has a lot more well-rounded players."

An apt description for the Chicago Fenwick star who has been a stalwart for the Bruins this season. A defensive specialist, he has still scored 18 times as of the end of September, including a hat trick against Pepperdine on the 29th.

Wendt followed his father's footsteps. Joe too was a star at Fenwick High School before the sport was sanctioned by the Illinois High School Association. Tempted by the proximity and allure of Division I water polo at Loyola of Chicago, he instead chose aquatics powerhouse Indiana, which fielded a water polo team that often competed against D-I foes.

He had his son tossing the ball in the pool at an early age, and Chris did not begin competitive swimming until high school. Soccer, baseball, basketball, and water polo were his sports. A tryout with USA Water Polo got him on track to be on the Cadet team, and introduced his talents to coaches at the highest level. His current place on the Junior National team, where his abilities are level with California-bred players, is a direct result.

At Fenwick he flourished under legendary coach Dave Perry. Wendt recalls only one loss, to Ransom Everglades during a Spring Break trip, in his high school career.

"We always had the feeling we were the best team outside of California," despite the loss in Florida.

"We were proud to be spring ‘champions.’ We weren’t allowed to play club teams from California. We wished we could have. It would’ve been fun to play them as Fenwick."

Springs were occupied with winning state championships (four in a row), but summers were filled with Windy City Water Polo and US National Team obligations. The exposure led to heavy recruiting by all the top programs, unique among Illinois players. The Bruins won out.

Wendt is on track to make a go at the US Men’s National Team in the next several years, and may already be the most acclaimed male player ever from the state of Illinois. On Saturday in Santa Barbara he will cross paths again with Teddy Zhang, Utah’s finest, and fans will be treated to some of the best collegiate water polo with a decidedly non-Californian pedigree.